Verbal intelligence: from what age can we stimulate it and how?

Verbal intelligence: from what age can we stimulate it and how?

Did you know that your child’s success at school also depends on the volume of words he/she will hear every hour, by the age of 3? Moreover, did you know that by mastering language they will be able to express their feelings, needs and desires, which will reduce the frustrations caused by misunderstandings, that lead to tantrums?
These are two important reasons to stimulate your child’s verbal intelligence. But how to make this process easier for all family members? To find out the best tactics for speech development in the child’s early years, I talked to Valentina Secară, specialist in early education and founder of the FIRST7 training center for parents and educators.

How to encourage your child to speak?

The first thing is to talk to them as much as possible. “The language must be positive, articulate, directed to the child in the form of a conversation, asking questions to the child and offering the possibility of responding or reacting. For a the speech to develop harmoniously, children need abundance in language, either as conversation, being read aloud, etc. “explains Valentina Secară.
The degree in which language is developed at age 2 is an indicator of the child’s performance at the beginning of school. Valentina Secara, First7 training center specialist, states that understanding and using vocabulary in 2-3 words sentences by age 2 is associated with easier adaptation in primary school.
The environment in which we communicate with the baby also matters: how parents interact with the child, how many various activities they make together, the number of books and toys that are within reach of the child, they all influence vocabulary development and expressiveness by the age of 2. Also, the time children spend in front of a screen also has an impact on language aquisitions; the child’s performance will drop as time spent on the phone, tablet or TV increases. 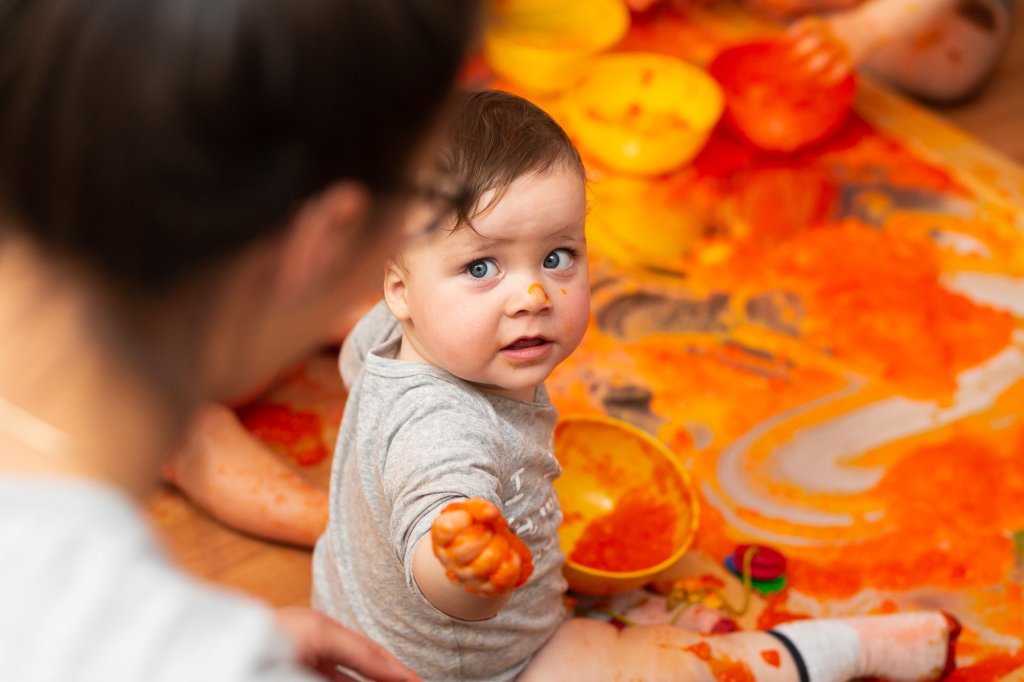 Engaging the child in direct conversation goes hand in hand with reading. Babies who were regularly read to by six months of age had a 40% higher capacity to grasp vocabulary by the time they were 18 months old. Babies who were not read had only 16% increase in vocabulary assimilation. These statistics come from a study by physician Pamela C. High and her associates at the Child Development Center at Rhode Island Hospital.
What do you need to remember? “Children who benefited from a rich vocabulary by way of conversation and being read to by the age of 3, went on to make significant progress in school. Reading gives them access to a variety of words, so it’s good to read along with your baby. According to an American study, children’s books contain 3 times more unusual or rare words than daily conversations between parents and children, “says Valentina Secara, First7 Early Years Conference organizer.

Here are a few suggestions from Valentina Secară about how to teach your baby sign language:

• Start with easy demonstrations from age 6 to 8 months, making sure you have your baby’s full attention for a few seconds.
• Start with 3 – 5 signs, keeping eye contact and saying the word associated with every sign out loud. It is recommended you start with signs that can be easily associated with objects – for example, the sign for ball.
• Repeat the signs constantly and ask other people who care for the baby to also use them.
• Observe when your baby correctly uses a sign (it takes about two months), then you can add a new sign.
• Small children may take the initiative and invent their own signs. Use those, provided you agree on their meaning.
• It is possible for the baby to be reluctant at first or not to be interested in this type of communication. Children are different, and this does not indicate a problem in their development. Occasionally, they may respond to signs but never use them.
• Do not forget this should be a fun activity and its purpose is not to replace speech. Just add signs to your daily conversations.